Voices From Both Sides

Every year since 2012, people have banded together, literally, for a day of music and fun on the Rio Grande. Musicians grab their instruments and set up on the bandstand at the edge of the river near the border town of Lajitas in South Brewster County. They take turns playing songs with bands just across the border, on the Mexican side of the river, at Paso Lajitas, an even tinier village.

It might be the coolest littlest hottest most symbolic music festival on Planet Earth! 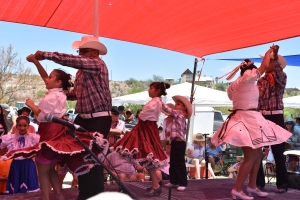 Grupo Nuevo Generacion foklorico dancers – of all ages – performed to a delighted crowd.

Voices From Both Sides began as a way to showcase the talented border musicians near Terlingua and Lajitas, U.S.A., and Manuel Benavides, Paso Lajitas and Ojinaga, Mexico. Border music is a big thing, and the festival was a way to celebrate this little corner of the world.

But there is something even more compelling about the event, because it all takes place on the actual border!

Grab a float and join the party, on the first Saturday of every May. Check out the official Facebook page for more info: www.facebook.com/VoicesFromBothSides/

Most residents of the little villages dotting the Rio Grande/Río Bravo in the Big Bend region have been connected to family and friends on both sides for generations. If it weren’t for the rules of international travel, the river would hardly be a border at all. But since it is, it’s very important for everyone to follow the rules, and freely crossing the river was banned after 9/11.

It used to be common for people of Boquillas, Mex., across from Big Bend National Park, for instance, to cross over and do their shopping at the Rio Grande Village Store, or for people living in Paso Lajitas, Mex., to buy goods less than a mile away at the general store in Lajitas, U.S.A., but that’s no longer possible. And it used to be a lot easier for friends and family to stay connected, but now, the nearest legal port of entry is hours away. 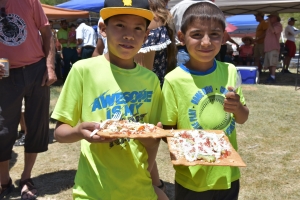 Good food at every turn.

It’s important to mention all of this, because it’s what makes Voices From Both Sides so special. The background makes the day of celebrations even more meaningful, but people are so busy having a good time and enjoying themselves, it’s easy to forget the significance.

Playing freely in the water as musicians from two countries play songs makes it very difficult to stop smiling.

The whole border community comes together for this fun day, and businesses donate everything from canopies to BBQ—and Big Bend Brewery brings a couple kegs of local brew. It’s a good idea to bring your own lawn chair, but it’s just as likely that you’ll spend the afternoon swimming in the river or dancing to the music, and you won’t have a chance to sit down until it’s time to leave.

The event starts at noon, and after a couple hours of music, the mayors and representatives from both sides of the border lead the way to a giant circle of friendship in the middle of the river.

Then it’s back to splashing in the water for the kiddos, drinking a cold brew for the adults, tasting food prepared from both sides, and cutting a rug to the fine tunes of borderland musicians. 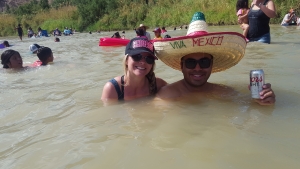 A couple came all the way from Dallas to check out Voices From Both Sides.