Or more like Pterosaur’s-eye view! One of the oldest flying dinosaurs soared these skies 65 million years ago, only to be discovered in fossil form eons later in Big Bend National Park.

That discovery of the Pterosaur, Quetzalcoatlus, in 1971, exposed a wingspan of 36 to 39 feet. A life-size replica resides at Fossil Exhibit in the National Park. That’s certainly one way to experience the majesty of this creature.

But you’ll cover a lot more ground if you take to the skies and check things out from the Quetzalcoatlus’s point of view. To do that, I booked an air tour with Marcos Paredes, a seasoned pilot and captivating tour guide, who offers year-round flights through Big Bend Air Tours.

His Cessna, Ol’ Brownie, happens to have the same wingspan of a Quetzalcoatlus. Coincidence? I think not. 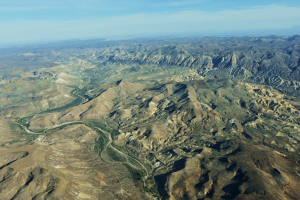 Marcos dazzled my friend and me with stories about the lands below. We followed one of the earliest wagon roads as it stretched from quicksilver mines in Terlingua to the Railroad depot much farther north. Times have changed, of course, but time did not erase that old wagon road. 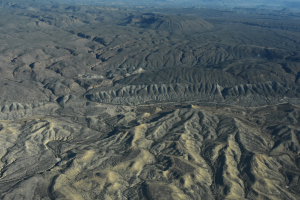 An old wagon road is still visible along the edge of El Solitario in Big Bend State Park.

With 29 years of Big Bend experience, Marcos answered every question we had, often before we could ask. The landscape came alive, and I saw more in 90 minutes than on most camping trips! 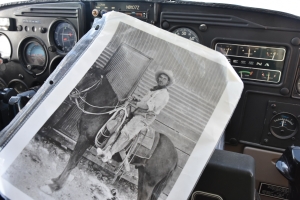 An air tour with Marcos is interactive – he brings along photos and fossils that make the stories and places from down below even more significant.

There are so many iconic places in Big Bend, and Santa Elena Canyon was one of many I wanted to see from a plane. One of my earliest Big Bend trips was to the magnificent Santa Elena Canyon trailhead in the National Park. I remember walking to the very end of the canyon – or at least, as far as anyone could go from that direction, which was about 1.4 miles. 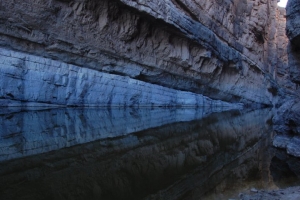 The walls of Santa Elena Canyon as seen from the National Park trail – a trompe l’oeil as far as the eye can see!

The mechanics never quite made sense to me, and later, when I learned people could raft through the canyon during high waters, I had a difficult time picturing how that worked.

As Marcos steered Ol’ Brownie toward the Rio Grande, the larger context was revealed. Santa Elena Canyon is seven miles long of sheer cliffs, towering above the river – seen as mysterious cracks from above. The canyon was created as the river carved a path downward through blocks of land that sit at a much higher elevation than the surrounding area, thanks to geologic faulting. 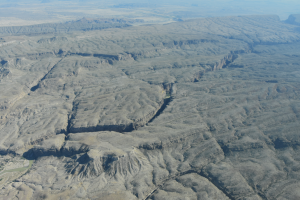 The Rio Grande jettisons and turns between high canyon walls, before emptying at the familiar trailhead in the park, where the fault scarp abruptly ends. 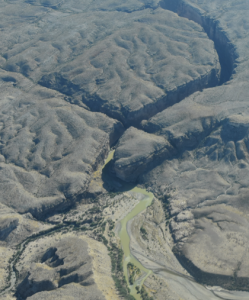 A closer view of where the Rio Grande enters Santa Elena Canyon, and is commonly known as the Entrance Camp.

The air tour put a few pieces of this puzzling land together, and while one flight was a thrill, it only made me want to go on another!

Marcos offers several air tours of the region, and can customize the route to cover just about any area – just be sure to discuss what you want to see in advance. Or, just trust him – that’s what I did! The morning of our flight we took in amazing sights – from the Solitario in Big Bend State Park to the Chisos Basin in Big Bend National Park, and we saw places that aren’t open to the public, like the Devil’s Playground. 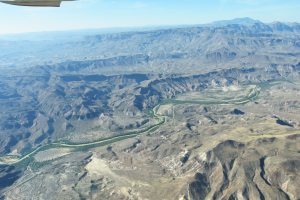 The Rio Grande, seen from above, meanders through a thirsty landscape.

Be a Pterosaur for a day, and fly in Ol’ Brownie. The plane can accommodate persons with disabilities, and Marcos’s friendly flights make the most inaccessible areas accessible to all! 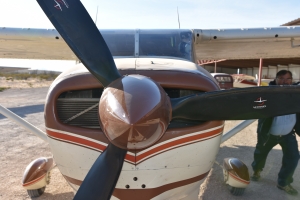 Marcos Paredes and his Cessna, Ol’ Brownie, ready for flight. Marcos has worked in and flown over Big Bend for decades, and knows the area like the back of his hand.