by Elizabeth A. Garcia

When I decided to get away for a while, I only meant to experience the West, not have it invade my heart and soul. Somewhere on the list of national parks and other places I couldn’t wait to visit was a vague plan to return to Florida.

When a friend and I began our trip, our first destination was Big Bend National Park because it was February when we left home, and the park was located in Texas. How cold could it be, right?My friend wanted to skip it. “Nothing in Texas but miles and miles of miles and miles,” was her favorite witticism. I always replied, “You’ll see.”

One time I had opened a book about America’s national parks to a page showing a steep canyon. A muddy river flowed out of it, and at its edge, on a rocky beach, sat a cowboy on a horse. The text spoke of jagged mountains, sheer canyons, and hundred-mile vistas. Without knowing anything more, I longed to go there. The page header read: Big Bend National Park, Texas. Texas? I didn’t care; I was going.

Approaching the park from Marathon, our first glimpse of The Chisos Mountains was surreal. They looked like a mirage, no more real than the mountain-like clouds you sometimes see on a distant horizon. It was a cool, misty day and for a while they disappeared altogether. We decided they had been dark clouds after all. Santiago Peak drifted in and out of the mist as we passed, and my friend said, “Typical Texas, they brag about everything and claim to have mountains—and this is it?” She was insulted. 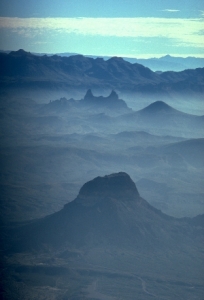 “That’s only one mountain.” “Huh.” She was unconvinced. I was sure there were more; I had seen the photographs.

As we progressed through the park, the entire landscape seemed alive, coming and going and disappearing again in the fog.

“This is kind of creepy,” my companion commented. “Wasn’t that weird rock formation on the right a few miles ago?”

“Yes, but the road is winding. And I think there are a lot of weird rock formations all over this park.” I already had a sense of it.

“And the plants are all prickly-looking.”

“Those are cacti,” I said, “and they’re beautiful.”

“Did you notice the tall, spindly plants with lots of branches? They look like spiders lying on their backs with a bunch of legs in the air.” She referred the ocotillo, but we didn’t know their name yet.

I laughed; they were weird all right.

We came closer to the mountains; they were not clouds. As the mist lifted, some new part of them would be exposed, and then it would settle again, hiding what had just been revealed. Meanwhile, we had not passed even one other vehicle. With the slinking fog and abandoned road that seemed to never get anywhere, the oddly shifting 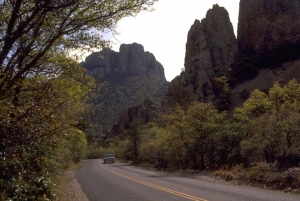 At last, we neared the park’s headquarters, Panther Junction. A sign named the three peaks behind it, Pummel, Wright, and Panther. We could see the bottom parts but what ever was above was shrouded in clouds, yet  those three mountains had a presence—that’s the only way I know to describe it. The promise of more was there, and we only needed to have patience. We parked and got out of the car. The air was wet, but not tropical wet. This air was fresh and cool—mountain air. We breathed deeply of it.

“This is great,” my friend admitted. We stood at the farthest point of a nature trail, staring at the canyons cut deeply into the base and the rough rock formations and giant boulders and plants all over the big, wide, hugeness of it. “I told you there were mountains in Texas,” I said.

We hadn’t even seen the mountaintops, and we were enthralled. While we stood there wondering at it all, the clouds dipped low and the sun burst out and we saw the peaks for the first time. “Holy crap,” my friend said in a whisper. It was a lot more reverent than it sounds.

I had no words. I had come home.