The Lost Mine Trail Experience: Low Barrier To Entry, High Pay Out

As a recent transplant to Texas and an avid hiker, I sought out lists of the greatest hikes in the state as soon as I arrived. Of course, the joys of Big Bend National Park come up on every Top 10 list – with the South Rim trail usually at the top of the top.

So, on my first trip, my son and I hiked the South Rim trail, and it was everything the list makers said it would be: spectacular, inspiring, exhausting … It’s a 12 mile walk and was well worth it.

On my next trip, I was hoping for a similar experience. A friend was coming along, and he has knee problems, so we were looking for a trail that would provide spectacular vistas that wasn’t as long as the South Rim trail, with less elevation gain.

And so, we settled on the Lost Mine Trail, and headed to the trail head out of Terlingua early in the morning. The park service website warned that the parking lot at the trail head would fill up, which proved to be perfectly true. 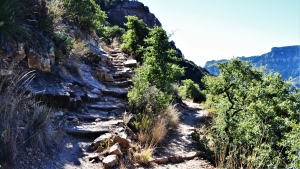 We arrived around 9AM and took the last parking space on the winding road to the Chisos Lodge that is set aside for the Lost Mine Trail. My first bit of advice for anyone seeking this pleasure is to arrive early, because if you can’t get a parking space, you have to park further down the two-lane road and the first part of the hike will be walking along the road to the actual trail head.

Regardless of where you park, the trail head starts unassuming enough, and is well-marked through the brush, offering some nice views back to the west, between the foothills of the Chisos.

About half way along, one is treated to the first glimpse of what’s waiting at the top, which is a spectacular view down the Juniper Valley and up at Casa Grande Peak. As is so typical of Big Bend, the visibility from this point is amazing; even from this relatively low point, one is looking deep into Mexico in the distance. 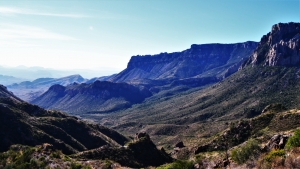 From this stopping point, the views just get better. There is a series of switch backs as the trail heads higher, and then suddenly, one reaches the back bone of the mountain and the valley – peak and distant mountains merge in to one jaw-dropping 360 degree view of the world. 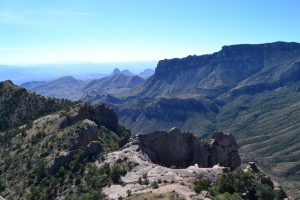 Here, people gather on the rocks where the trail meets a flat space, and open their sacks and eat. However, there is another 1000 yards that one can go, across a rocky ridge that drops off on both sides; then one finally reaches the true trail end.  There is a giant rock there that comes to a point and the brave can climb it and experience a true ‘King of the World” moment, if they choose. 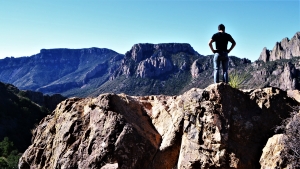 I can’t speak highly enough of this hike. The investment versus the reward is very favorable to the hiker. There were many kids on the trail and at the top, so it’s easy and safe enough for tiny tikes, but they should be kept close at the top because there are no safety features there. 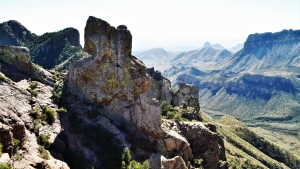 I’ve hiked on several continents and so can confidently report that a trail with such a high payoff accessible with such ease is rare. It is a marvel, even for Big Bend, which is teeming with marvels. 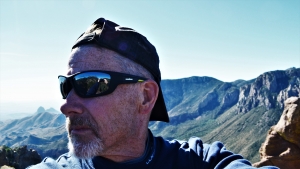