A River Worthy Of Its Name

The Rio Grande is a diminutive creek compared to the world’s mightiest rivers. The Amazon, the Nile, the Mississippi make no claims to greatness in their name, but the Rio Grande does have a few attributes that allow it to justify its lofty moniker. 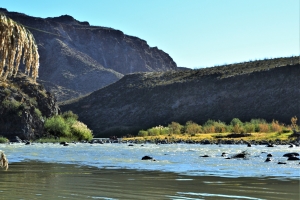 First, it divides two mighty nations, the United States and Mexico, though one would not know this where the Rio Grande borders Big Bend National

Park. The river is not posted as a border, or even posted at all, and neither is it fortified with crossing stations or armed guards. There is no sense of crisis at the border there. Sheer cliff walls on either side discourage border crossing at that point, as does the distance to any large cities.
Instead, the river flows quietly past massive rock formations that are typical of the immensity of the entire Big Bend area. The pomposity of the scenery near and far make the trip down river a visual pleasure, all set to the music of the non-human sounds so rare to enjoy; flowing water, gentle wind, and a few bird calls now and then. 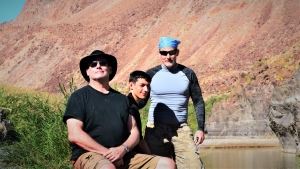 I took the river ride in November, and my companions and I picked up the van to the entry point in Terlingua and then headed west. Along the way we were treated to vistas that are outside the park proper. After a brief ride, we reached a landing where a path was cut through the tall reeds and grasses that line the banks of the river anywhere there is soil to accommodate them. 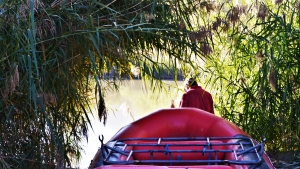 The rafts are large inflatable vessels with metal frames so they are sturdy and comfortable. There are a few mild rapids along the river and we could sometimes hear their gurgle before we saw them. Most of the river, however, moves at a languid pace and our river guide, a veteran named Jack, paddled us along and answered questions about the river, the grasses, and the wildlife we saw along the banks.

After a couple of hours of floating, we stopped along the banks for lunch. The river crew set up a table under the shelter of one of the rock formations and everyone made a plate and sat in the soft grasses to eat. This particular bank was in the sun and so it was warm; one notices quickly that in the dry desert air, the temperature difference between shadow and beaming sunlight is stark. Mercifully, there were no biting insects to contend with. 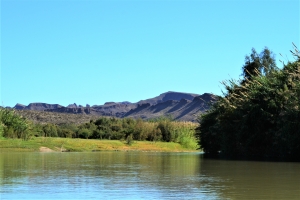 After lunch, we continued down river, and the stunning scenery just kept coming, first as dark cliff faces, then as pink-hued mountain ranges in the distance, then as embankments of green grasses with grazing cattle, then as massive grey boulders with water swirling around and making the river music. People were quiet, stunned silent by the warm sun and towering cliffs and glowing mountains. 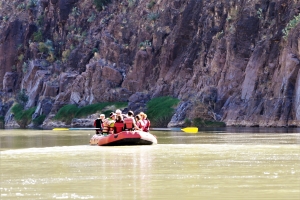 The trip ended with as little fanfare as it began; there was no dock and no shacks looking to sell us tourist souvenirs or snacks. There was just a dirt landing and a van and all the riders pitched in to help the professional rafters get the inflatable boats stacked on the trailers.

The whole experience was typical of my trips to Big Bend. There are simply a lot fewer people in deep southern Texas, and the people who are there, those who visit and those who live there, are a different breed. They are committed to the outdoors during that time, and as such, quieter, more reverent, less prone to complain.

My short time on the Rio Grande changed my impression of this long-suffering river, long associated with controversy, immigration, and desperate crossings. At Big Bend, it’s none of that; it’s a quiet, peaceful stream set between nations and separating mountains of perpetual beauty. 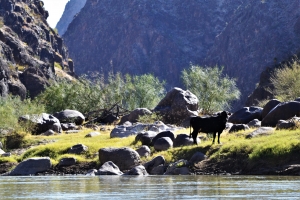 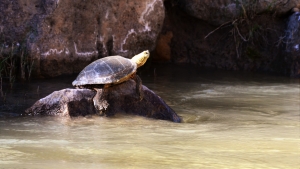